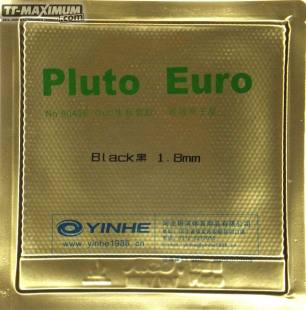 YINHE (Milkyway) Pluto EURO is a novelty of 2018. The company has developed EURO versions of all its spikes, they are made of high-quality, rather than conventional raw materials, and have well-improved gaming properties. If you consider that the usual, cheap versions have very decent gaming properties, the improved, as demonstrated by testing, you can safely write in a number of the best overlays of its type.

Pluto EURO is a medium-sized spike with an even more control unit than a simple Pluto. But at the same time, the trajectory of flight and bounce of the ball at the EURO version is much more dangerous and difficult for the opponent. The speed has become a little higher, which with improved control creates additional advantages to the owner of the lining and complicates the game to the opponent, forcing him to make more mistakes.

Unlike the simple Pluto, which has a low grip, the EURO rubber version is very tenacious and allows you to create your own powerful rotation. For example, pruning on the table from Pluto EURO is possible not only simple, but also with a powerful sawn, forcing the opponent to roll the attack into the grid. This is especially useful for the reception of the filing, but in the future draw will also find where to apply this property.

Flat kick in special comments does not need, it was as beautiful at the simple Pluto, and remained beautiful. Although a good kick is not at all medium spikes can be found.

The 1.8 mm thickness has greater attacking capabilities and greater speed, but a little less effect than thinner sponges. Whereas thinner sponges have a more destructive effect, they are a little more difficult to attack.

Separately, I would like to say more about Pluto with a thickness of sponge 1.2 mm. We in the store tried Pluto Euro 1.2 mm at the same time as 1.5 to compare. 1.2 mm turned out to be wonderful. It turned out that it can be used in defense, in combination game, and even in attack.

Compared to the 1.5 mm thickness, the lining has become much slower. But despite the thin thickness of the sponge, the lining didn't make it to the tree on the basis of the OFF- on which we tried these spikes (but we can't guarantee that it won't make its way to the tree on tighter bases). 1.2 mm is understandable, there are no flaws in different elements. Speed is enough to attack the opponent in a short distance, which is also at the table. Or to force your opponent to return you a comfortable ball to complete the attack. The control at the thickness of 1.2 mm is very good, or rather even magnificent.

If you need such "slow attacking" spikes, then order boldly. Don't be confused by the thickness of the 1.2 mm sponge. Pluto Euro with such a thick sponge turned out to be quite universal and without pronounced shortcomings.

See also a detailed video review (in the Video tab).

Note on the available thickness: the "other thickness" option means that at your request we can collect OH - any sponge we have. You can see the sponges separately in the "Lips" section. And when ordering in this case, choose the option "other thickness" and specify in the note to the order, what kind of sponge and in what thickness you want. Or consult with us - we will help to pick up, if necessary.

Note on the name of the firm: some stores write GALAXY instead of YINHE or MILKYWAY, who are interested to know how to properly name the firm - here is the details.