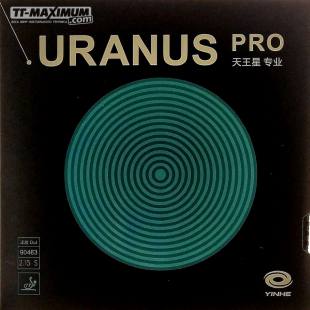 After the ingenious but not cheap Uranus Euro, YINHE released even new tensor short spikes with a very modest price as for the tensor lining with such properties. Uranus Pro Soft has a very decent speed, (roughly like the first Waran). At the same time, control was managed to keep at a very high level, better than many more expensive competitors. And the effect is also very good, surprisingly for this level of traction. The level of grip is high, allows you to play topspin, serve with a strong rotation and make saws. It is not clear how they manage to combine all this in one overlay, but somehow they succeed.

If you compare with Uranus Euro, Uranus Pro Soft has more speed, but inferior in effect, and more focused on attack and aggression. At the same time, despite the increased speed, the control in the defense of the phasing still remained very high.