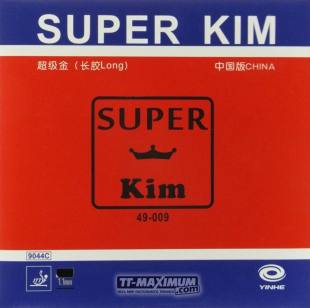 Released at the end of 2019, the long spikes of Super Kim are named after the defender from the Korean national team Kim Song I, who plays them (based also on the firm YINHE https://tt-maximum.com/shop/blades/yinhe-milkyway-980-pro-def).

These spikes are designed to play with modern plastic balls. They are not fast, very control and have a noticeable craving. Allow you to comfortably and accurately perform a variety of game elements inherent in long spikes, and are capable of a powerful reverse rotation.

The standard sponge 1.1 mm and 1.5 mm - a special, super-soft damping, on it this lining is VERY slow. See the next item card. Also, the OH version, which is cheaper than versions on the sponge, is presented in a separate card.

And here is a version with other game properties. This version of our own build, called CHOP (i.e. pruning in the middle/far zone, with English), has a sponge specialized to protect pruning away from the table on not very fast bases. Although, of course, a player with good technique and accustomed to the defense fast base, too, will be able to defend it effectively.

This version, especially on not fast bases is much better for protection in the far zone. It gives both better control and more difficult balls for the opponent. At the table with such a sponge lining plays also very difficult for the opponent, although it is somewhat more difficult to manage than the classic version on a damping sponge.

See also detailed video reviews on each version in the Video tab.

Note by the name of the company: in some stores write GALAXY instead of YINHE or MILKYWAY, who is interested to know what is the right name of the firm - here's a detail about it.