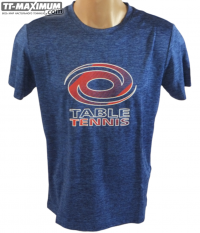 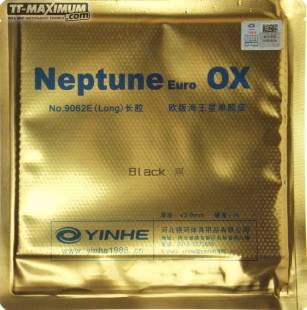 Neptune EURO is a new development of The YINHE (Milkyway) firm, launched in 2018. These new spikes, as you might guess from the name, are an improved version of the long and deservedly popular Neptune lining.

So let's talk about the properties of Neptune EURO first in comparison with the usual version, for those who are familiar with Neptune. The EURO version of the sense is very similar to the usual, the same pleasant feeling of softness, the highest control and high tpressiness. At the same time - higher speed, controllability in defense against powerful attacks even better, and saws come back even more viciously. It's very similar, but even better. If conventional Neptune is an outstanding tool among the most budget overlays, Neptune EURO with its improved properties successfully competes among the expensive ones. Although it is cheaper than long spikes from European and Japanese firms.

For those who haven't played the usual Neptune, let's describe the game properties of Neptune EURO. This is an overlay with outstanding properties of the game in the defense of the pruning. Since it combines maximum control in the topspin pback with the highest spitefulness of returned balls - due to the combination of aggressive trajectory, very powerful reverse and increased pace.

At the same time there is an opportunity to aggressively nag and flat balls - the clutch allows them to confidently saw and give a quick, low and aggressive pruning. Due to a good grip, you can and easily vary the return of the ball when pmattering on the topspin - you can return the saw, and you can remove the rotation and return the flat under the guise of a notify.

The block on the table is not only very control, which is often in strong thorns, but also unpleasant and dangerous for the opponent, which among this type of overlayis is much less common. But Neptune EURO has a block low and stele, forcing the opponent to make mistakes.

Attacking with comfortable balls with a flat kick is convenient, the ball goes clearly. From less convenient it is easy to roll in place, in an empty corner and other inconvenient points for the opponent.

In general - as is customary in YINHE, the product turned out with very decent gaming properties and with a very good combination of quality and price, as the quality is the highest, and the price is lower than many similar products from more expensive firms.

The print (name, etc.) on the lining is the same as on a regular one, but it is easy to distinguish them by the color of the rubber. If regular Neptune has a dim shade of red, Neptune EURO has a richer and juicy color, very similar to tsp Curl P-1-R. You can also distinguish the texture of the back of the sheet - the EURO version has a mesh texture.

The price of versions on sponge and OH varies, so they are decorated with different products.

See also a detailed video review (in the Video tab).

Note on the available thickness: the "other thickness" option means that at your request we can collect OH - any sponge we have. You can see the sponges separately in the "Lips" section. And when ordering in this case, choose the option "other thickness" and specify in the note to the order, what kind of sponge and in what thickness you want. Or consult with us - we will help to pick up, if necessary.