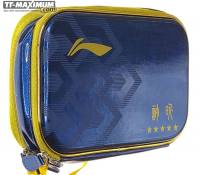 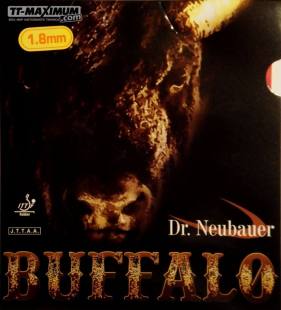 Buffalo is a 2015 development, all glass (no grip) antispin, very slow and very controllable. And he completely ignores any spin that comes, while maintaining high control when hitting balls without spin.

The game is similar to the now banned Super Block pips in official competitions, the ball bounces just as low and short and with almost the same strong reverse spin. For many years the Doctor and other antispins developers have been striving to create a rubber that would be as effective as Super Block, and it seems that they finally succeeded.

The properties of Buffalo are as follows. The sponge is rotten damping, and the adhesion of the surface tends to zero - there is basically no reaction to incoming spin. And, of course, giving your own spin is impossible too. On the other hand, zero grip allows you to play very effectively on any balls with or without spin, regardless of spin at all! At the same time, the role of the correct angle of the ball meeting with the racket increases - when it meets at an angle along the tangent, the ball will slip and break off. Therefore, when playing with this rubber, it is important not to allow the ball to meet tangentially, and try to play all the balls so that the racket moves towards the flying ball. For the same reason, instead of the classic undercut (in which the racket rolls the ball), it is necessary to use the technique with a large inclination of the racket in order to meet the ball more directly, without rolling.

When choosing the thickness of the sponge, keep in mind the following: the thicker the sponge, the lower the speed, the thinner, the greater the return of spin. In any case, the rubber is very slow with any sponge thickness, and gives very little rebound even on very fast foundations. Therefore, to play with this rubber, the speed of the blade must be matched to another rubber, and not to this one, since the speed of the base strongly affects other types of rubber.

In block play, and this is perhaps one of the main elements for which such an overlay is taken, it gives a short and low rebound even on a fast blade and even on a very strong attack, both on topspin and on a flat strike. It is only important to meet the ball towards the flight path, so that the ball does not slip, but bounces off, since the blade has no grip so that the ball will catch on when it meets at an angle along a tangent.

Buffalo also works effectively in undercutting when retreating to the middle and far zone - it gives a strong topspin with a strong spin and allows you to return topspins with good control. So it can be used successfully by those tennis players who leave the table a lot.

As for the attack, the main methods of attack with this rubber are lifting and aggressive swing, however, some reasons allow you to coast, but few. In any case, the main attack when playing a racket with such a rubber should be done with the other side of the racket, a smooth pull rubber, or short / medium pips.

This rubber can be played with varying degrees of aggressiveness, for example, it allows a tennis player to play very aggressively on the table with a sufficient level of training, scattering balls at high speed in order to prevent the opponent from attacking and forcing him to give an easy ball for his own effective attack. It should also be borne in mind that in the complete absence of playing technique, it is better to take ordinary pulling rubbers and first learn the basics of technique on them. And the higher the level of technology of the owner of the patch, the higher the efficiency of its use.

Watch also the video, where, in addition to familiarizing yourself with the behavior of the rubber in the game, you can also familiarize yourself there with some techniques for playing this rubber. This will be useful given that the classic pulling technique with the Buffalo is not effective as a non-grip rubber requires a different technique. But with the right technique, this antispin is very effective!