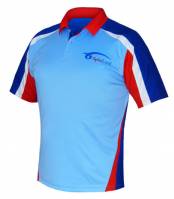 YINHE (Milkyway) racket 13B Carbon Off 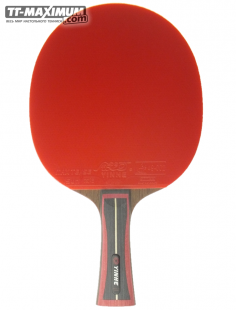 YINHE (Milkyway) 13B is a rare case specially selected by me (A. Sykachevsky) when a racket assembled in a factory is suitable for playing table tennis. This racket is made of high-quality base with carbon and high-quality overlays, and is quite suitable for both initial training and advanced amateur play. As a budget option, as well as for those who do not want to bother with the selection of individual grounds and overlays.

This is a full-fledged attack racket (assembled directly at the company's factory) with overlays with a sponge thickness of about 2.0-2.1 mm. All the technical elements to perform comfortably, except for the protection of the pruning - for this it is fast.

The racket has a pleasant sense of the ball. Not very tough, somewhere in between middle and hard. The handle is quite thick and wide in the hand lies very comfortably.

The rotation of the racket is able to create a very large and at trims, and on the serves, and especially when performing topspins and tossers. Various topspins and topstrokes - this is the main weapon when playing this racket. Flat beats and kicks are also perfectly executed by this racket.

Despite the fact that this racket is cheaper than those that are assembled from individual components (base plus a couple of overlays), it can compete successfully at the amateur level and even higher. Because the racket is much less important than the player who controls it. Therefore, at the expense of their own technology and tactics, it is possible to cover some flaws of the inventory, if any.

Note on the pads on it. This is usually YINHE Mars II, Venus II, Jupiter II, Sun, Moon, although others, such as Saturn Pro, may come across. Naturally, it is only smooth linings, not spikes. At the same time, although these linings are both signed and look the same as the separately sold YINHE linings, they differ in game properties from the separately sold overlays, as they have a different, cheaper than individual pads, sponge.

Note on the ground. Unlike the 10B and the younger rackets with carbon bases, the racket 11B and above use the bases of a higher class - with arilat-carbon, Kevlar-carbon, etc. What exactly will fall on a particular copy of the racket, it is a lottery (to choose something specific, you need to collect a racket from a separately bought base and linings), but the main essence of the difference of rackets 11B and above - that here in general used more expensive and the best gaming components. Also, the 13B and above handle has a more beautiful and expensive design.

And this should be kept in mind - the difference in price between this racket (assembled at the factory firm) and collected from separate overlays and base kit, is justified by the difference in quality. Collected from individual linings and bases, the racket will have the best gaming properties (although for the most expensive rackets in the series, this difference is reduced, as they are made of higher-quality components). However, this racket plays quite decently and allows you to learn the technique of all the basic techniques of table tennis, as well as play at an advanced amateur level. The durability of the overlays is high, the grip is maintained for a very long time, as opposed to the "rackets" from the supermarket, even much more expensive, or expensive rackets from fashion brands with the strettes of champions on the packaging.